The Business of the Museums 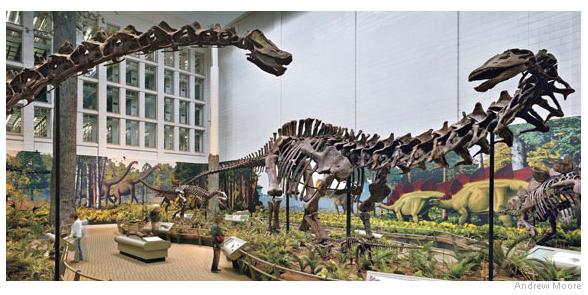 When this 84-foot diplodocus (nicknamed Dippy) was first mounted, in 1907, it was held together by crude animal-hide glues that deteriorated over time. Now, the Carnegie Museum’s conservators use adhesives made by Paleo-Bond, based in St. Paul. Some of the glues bond one bone to another; others can actually penetrate the fossil, seeping deep within it to fill microscopic cracks and fissures. Bill Mason started the company in 1992. Now nearing $1 million in revenue, it also sells coatings that keep meteorites from corroding.

After lying underground for 150 million years, fossils are usually encrusted in rock and dirt. To clean them, Carnegie scientists use micro sandblasters made by Crystal Mark, Inc.  based in Glendale, California. The blasters emit abrasive particles in a stream no larger than the period at the end of this sentence. Jawn Swan runs the 20-employee company, which was started by his father, Ernie, in 1967. Only 10 percent of its sales are museum related; the blasters are also used to clean circuit boards and other electronic equipment.

Once depicted as a lumbering, tail-dragging behemoth, the apatosaur at the Carnegie Museum now looks positively agile, thanks to work done by Phil Fraley Productions. The company, based in Paterson, New Jersey, completely disassembled and remounted 13 of the museum’s 19 skeletons during a three-year makeover beginning in 2005. The new pose reflects current thinking about how apatosaurs moved and interacted. Phil Fraley and his wife, Carol, launched the exhibit-fabrication company in 1999; it has 27 employees.

Dinosaur enthusiasts who can’t make it to Pittsburgh can still view some of the museum’s prehistoric inhabitants. A webcam from StarDot Technologies provides a pterodactyl’s-eye view of the dinosaur hall, updated every 30 seconds on the museum’s website. Vance Kozik launched the Buena Park, California, company in 1995; it now has 25 employees. StarDot’s webcamsalso provide shots of Egypt’s pyramids, the Old Faithful geyser, and a North Pole ice floe.

Staff writer Kasey Wehrum has written for Inc. magazine on subjects ranging from the businesses behind professional bull riding to gadget inventor and father of the infomercial, Ron Popeil. His work has appeared in the New York Times, Worth,Budget Travel, and on MSNBC.com. He lives in New York City.

SEE US AT UPCOMING TRADE SHOWS